1 Angel Square, The Co-operative’s flagship office building in Manchester, was completed back in December 2012. The architects chose Fastlane Glasswing units to secure the iconic round building, which is easily recognisable within the Manchester cityscape, and we’re pleased to say our turnstiles are still in operation. 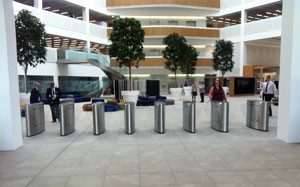 The turnstiles were customised to integrate seamlessly with Kone’s elevator destination control displays before installation by Security Solutions (Northern Ltd). Upon presenting a valid access control card, users are guided to the most suitable elevator for their destination. This system improves the foot flow of the busy headquarters while vastly improving the user experience.

“The stylish elliptical shaped pedestals of the Fastlane Glasswing mirrored the unique shape of the building. The optical detection technology combined with the fast-moving glass wings offered the level of security and fast throughput that was required without compromising on the looks.” Adrian Nottingham, Security Solutions.

The Fastlane range has an unusually low environmental impact with each pedestal consuming only 50 Watts of power during throughput and 12 Watts in standby. Furthermore, IDL is a British manufacturer with a small carbon footprint, choosing to use local material suppliers wherever possible for quality control as well as to minimise environmental impact. This all fits very well with The Co-operative’s commitment to making absolute reductions in their emissions.

“Our focus on combating climate change has seen our direct greenhouse gas emissions cut by 40% since 2006, meeting our 2017 target six years early.” www.co-operative.coop

The Fastlane system uses state-of-the-art optical technology to monitor the passage of every individual entering and leaving a building, with quiet but fast-acting glass wings to physically deter unauthorised access. The advanced detection system minimises nuisance false alarms from objects such as bags and umbrellas, while effectively detecting an unauthorised person following as close as 5mm behind an authorised person (‘tailgating’). The glass wings have a typical closing time of half a second. This, combined with its multiple safety beams, allows the system to safely close on tailgaters, with the wings being prevented from closing if they detect someone is in the way of them.

“1 Angel Square is an impressive building that we’re proud to secure with Fastlane. Reliability and fast throughput are critical factors where Fastlane really excels. Our green credentials are also becoming increasingly important for distinguishing Fastlane from the competition.” Phil Allen, Integrated Design Limited.

Problem solving as standard during fun day out
Next

Positive contribution: why sustainability isn’t just the smart thing to do, it’s the right thing to do