A popular product for applications requiring a medium level of security, the Fastlane Glasswing provides an attractive entrance control solution allowing high pedestrian throughput, and has been used to secure ORPEA’s Parisian headquarters, the Queen Elizabeth Olympic Park in London and the University of Birmingham’s new library, among other high profile sites.

As with all Fastlane turnstiles, the Glasswing utilises state-of-the-art optical technology to allow authorised entry after a valid card has been presented, closing quickly behind each user to prevent any tailgaters trying to gain unauthorised access and processing pedestrians at a rate of up to 1 per second. But, unlike the other turnstiles in the Speedgates range, the glass barriers of the Glasswing retract inside the pedestal.

Available in three variants: Compact, Standard and Wide, the Glasswing provides lane widths between 550mm and 914mm, so is ideal for when space is limited in a crowded reception area, for example, or when greater flexibility of movement is required for users with reduced mobility.

The Glasswing is available in a range of bespoke finishes – from natural stone, wood, granite or Nero Assoluto – meaning that the Fastlane Glasswing can be designed to match and reflect any given environment. The pedestals are also available in two different styles with a choice of elliptical or square ends.

From sporting venues to educational institutions, here are just three examples of environments in which this popular turnstile has been installed… 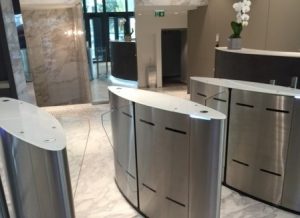 When ORPEA – the European leader in dependency, long-and medium-term physical and psychiatric care – decided to relocate its headquarters in order to accommodate its continued growth and allow its corporate team to be located on one site, the healthcare facility chose to protect its cutting-edge data centre using the Fastlane Glasswing Compact.

After the success of the London 2012 Olympic Games, the Queen Elizabeth Olympic Park stadium underwent a transformation to allow the venue to continue to host important sporting events, including the Anniversary Games and the Rugby World Cup in 2015, before becoming the permanent home of West Ham United Football Club in 2016. Sporting arenas accommodate thousands of visitors at every event, and manually processing and checking every spectator is incredibly time consuming, potentially resulting in long queues and delays. Part of this venue’s transformation included the installation of 10 lanes of Fastlane Glasswings, to allow faster processing of authorised ticket holders while preventing any unauthorised users trying to gain access. 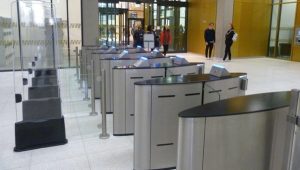 Part of the development of the new £44 million University of Birmingham library involved the installation of seven customised Fastlane Glasswing lanes. Lending themselves to customisation, the library’s Glasswing turnstiles feature an integrated card reader and purpose-built Telepen control panel, which connects to Sentry Juno, the only access control software specifically designed for academic libraries. This entrance control system not only ensures that only authorised users are admitted, but also enables a wealth of useful information to be captured, which has benefits for the university administration in terms of staff planning, budget control and other management planning. Specialist software integrated into the turnstiles can also be used to display useful information for the students such as book return dates or changes of room for tutorials, further reducing administration.

For more information on the Fastlane Glasswing, or any other turnstile in the Fastlane range, get in touch with our team on +44 (0)2088905550 or email info@fastlane-turnstiles.com

Why our customers choose Fastlane turnstiles – a short video
Next

Showcasing the future of integrated entrance control at SCTX